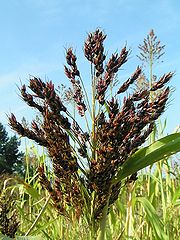 Sorghum (Sorghum bicolor [L.]Moench) is a complex species in the grasses family (Poaceae) with a wide variety of forms. Five main races of cultivated are commonly distinguished by their grain and spikelet morphology (Harlan and de Wet). The species also includes the wild progenitor subspecies, as well as weedy forms. The genus sorghum includes other tropical grasses, including the perennial diploid Sorghum propinquum (2n=2x=10) and the tetraploid perennial Sorghum halepense, commonly known as Johnson grass.

Sorghum was domesticated in Africa as an annual crop, is adapted to a wide range of growing conditions in terms of temperature, rainfall, soil fertility, altitude and latitude with a wide range of uses, such as many types of grain, animal fodder, firewood and construction material as well as biofuel. It is widely grown in arid, hot tropical regions, and can be highly photoperiod sensitive. It is a diploid (2n=20), partially autogamous crop. It‚Äôs genome was fully sequenced in 2009 (Paterson et al. 2009).

In some locations it is ratooned to produce two crops in the same year. Some early literature even suggests that sorghum was being used as a perennial grain in the early 20th century. Researchers at the Land Institute (Salina, KS) are currently breeding perennial varieties of grain sorghum and working with collaborators in Mali to test their performance there. Other research in the areas of bioenergy and livestock feeds have produced useful information on perennial sorghum for plant biomass production.

Map of optimal niche for perennial sorghum in Mali.

First, marginal agricultural areas were identified by using a combination of map products that identified areas with a combination of marginal land suitability for agriculture, poor net primary productivity, and sub-optimal surface temperature and precipitation. These maps were then combined with maps that identified areas with optimal growing conditions for sorghum based on temperature and precipitation. The intersection of these two map products produces, then, a map of areas of that too marginal for the production of important staple crops, but have sufficiently good characteristics for the production of sorghum.

Evaluation of tradeoffs by smallholders

Choice experiments were conducted in three districts in regions in Mali where annual sorghum is cultivated under low, medium, and high rainfall: Sikasso, Koulikoro, and Segou. The sample consists of farmers from 318 village households that were interviewed in March 2015. Each respondent evaluated five choice scenarios in which different aspects of the proposed cropping system, such as labor requirements, seed requirements, forage production, soil improvement, and grain yield, varied.

These estimates were then used to calculate demand or willingness to pay by calculating the marginal rate of substitution between each attribute and the yield variable. These figures should be interpreted as percentages, since sorghum yield was expressed as a percentage in the choice experiments (eg. -60% to -20% reduction in yield). The most important attribute tradeoff was soil improvement, as farmers would accept approximately a 25% yield reduction if they knew the cropping choice was improving their soil. Other attributes were less important in choice experiments, but did differ between men and women. Women appeared to value forage quantity more than men, while men discount labor requirements of cropping systems more than women. These results indicate that reduced labor requirements of perennial systems may not be sufficiently important to motivate adoption, but improvements to soil are.

To model the potential demand for perennial sorghum cropping systems as a replacement for annual sorghum in Mali, researchers developed system dynamics models that combine elements from sociological and economic theories of change that stress the importance of peer-to-peer communication in the adoption of new technologies. These models incorporated results from the choice experiments to further quantify farmers’ willingness to replace existing practices.

The primary control on adoption rates was related to the potential impact of sorghum on soil quality and subsequent productivity. A relatively modest 2% yield increase dramatically increases the adoption rate, whereas a 10% yield reduction significantly reduces it despite other potential benefits, such as reduced labor. Since the soil quality impacts are poorly understood in perennial sorghum currently, research on this subject will be very important in further clarifying adoption scenarios.